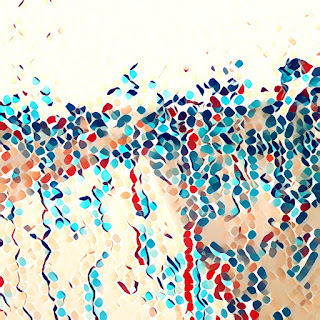 Today, I woke up to a snowy winter-wonderland... in what is supposed to be a mild Spring in Providence, Rhode Island. I am presently on the road, working with the chamber ensemble Verdant Vibes on the premiere of a new composition that was based on my interest in quantum physics.

Presently, based in Saint Petersburg, Florida, USA, I define myself as a "new renaissance artist" because my practice takes form in a host of different media and is influenced by a sea of changing preoccupations about the universe. I am not associated with a particular organization or university, which leaves me free to pursue a career as a "creative nomad" that tours extensively and creates with/for other artists. Coming with me to LLEAPP 2018 is an electronics rig that incorporates Max 7, Ableton Live, Source Audio Hot Hand Wireless MIDI controllers, Critter & Guitari Organelle, Critter & Guitari Septavox, MOOG Mother 32, Teenage Engineering PO-14, and a KORG Volca Kick. In addition to the electronics that I am bringing, I have experience as a concert pianist, toy pianist, movement artist, photographer, and writer. I am looking forward to meeting everyone and gleaning new insights on how our world can be expressed in an artistic framework.

Below is my proper biography as well as a link to my professional website:


Celebrated for her “terrifying dynamic range,” cleanliness of sound, as well as unique sensitivity and ability to sculpt her performance for the acoustics of a space, Elizabeth A. Baker is a dramatic performer with an honest, near psychic connection to music, which resounds with audiences of all ages and musical backgrounds. As a creator, her understanding of sonic space from organic intuition and studies in music production, pair with a unique eclectic voice, making for a spatial and auditory experience of music. Eschewing the collection of traditional titles that describe single elements of her body of work, Elizabeth refers to herself as a “New Renaissance Artist” that embraces a constant stream of change and rebirth in practice, which expands into a variety of media, chiefly an exploration of how sonic and spatial worlds can be manipulated to personify a variety of philosophies and principles both tangible as well as intangible.

An active performer highly sought after for her unique concert presentation methods, which break the fourth wall and draw the audience further into the music by asking them to listen beyond the surface through interactive dialogue, reminding them that there is no such thing as an incorrect interpretation of a work. Elizabeth firmly believes that every person will encounter music in a unique manner because each person comes from a different set of cultural norms, life experiences, and even the way they physically hear can be a factor to consider when seeking to relate with a work. Her solo concert tours have featured engagements at Lamar University (Beaumont, TX), Flying Monkey Arts Collective (Huntsville, AL), Eyedrum (Atlanta, GA), Southern Methodist University (Dallas, TX), Georgia Museum of Art (Athens, GA), and the Good Shepherd Chapel (Seattle, WA). As a mixed media movement performer her collaborative work has been presented at The Joslyn Museum of Art (Omaha, NE), The Gallery at Avalon Island (Orlando, FL) as well as at St. Petersburg Opera (Saint Petersburg, FL).

Emmy-award winning composer Larry Groupé has referred to her works as “Perfect.” and compared one of her early works to Debussy’s Engulfed Cathedral. Elizabeth’s works have been featured by performers, programming organizations, and online publications including: Composers Circle, I Care If You Listen, TEDxYouthTampaBay (Tampa, FL),  Tenth Intervention (NYC), Verdant Vibes (Providence, RI), OME Festival (Phoenix, AZ), Voic(ed) Project (Chicago, IL), The Florida Orchestra (Tampa Bay, FL), The Furies (Los Angeles, CA) as well as at Electronic Music Midwest Festival, and the 19th International Festival of Women Composers. Her compositions and work as an arts advocate have been studied in academic institutions throughout the United States including USC-Thornton, University of Buffalo, and the University of Georgia – Athens.

In 2015 she received an Individual Artist Award from the St. Petersburg Arts Alliance and the City of Saint Petersburg, Florida to create and present an original sound installation In Our Own Words: A Sonic Memory Quilt, which told the stories of various African-Americans in a fresh avant-garde manner, framed by evolving drones and a four-hour live performance by Elizabeth. Additional honors include, a 2017 Professional Artist Fellowship from Creative Pinellas; a guest artist spot in the inaugural co-incidence residency in Somerville, MA with master resident Michael Pisaro, who described her compositions as a marriage Schoenberg, Cage, and Satie; as well as a 2017 Individual Artist Award from the St. Petersburg Arts Alliance.

In addition to her work on the concert stage and on the page, writing for other performing artists, Elizabeth has extensive training in recording arts, live sound reinforcement, and consistently received praise as well as high marks for the artistic sensibility and technical excellence of her mixes at St. Petersburg College, where she studied closely under mastering engineer Dave Greenberg. Today, friends and colleagues across the globe, frequently look to her as a consultant on projects for her skills as both a recording and mix engineer.

Combining her love of electronics and keyboard instruments, Elizabeth embarked on a mission in 2015 to promote works for toy piano and electronics, using a setup that combines handmade microphones and hydrophones. Her original works have been hailed by the Orlando Weekly as “a sterling testimonial to her artistry that proves she’s not just an expert in the toy piano field but a pioneer.” In Fall 2015, Schoenhut Piano Company added Elizabeth A. Baker to their official artist roster.

Between 2016 and 2017, Elizabeth began working extensively with dancers on a number of projects including works for film, stage, and workshops which primarily featured toy piano, electronics, and Indian harmonium, a keyboard instrument that rarely appears on the Western musical concert stage. With the support of her mover colleagues and friends, Elizabeth began incorporating movement in her own performances, adding new depth to her interdisciplinary practice. In 2017 Source Audio LLC, officially endorsed Elizabeth for her innovative work creating musical compositions through physical choreography using their Hot Hands USB Wireless MIDI Controller technology. A sensitive improviser, with experience in a wide array of genres, Elizabeth is a frequent collaborator for improvisational ensembles throughout the United States.

Elizabeth is author of Toyager: A Toy Piano Method, the first comprehensive instructional book for toy piano, featuring principles of technique, practice strategies, music notation, as well as improvisational tactics. Additional books include a multimedia collection of writings and photographs called Musings of a Young Composer and Compositions for the Contemporary Student Pianist, an anthology of solo piano pieces. As a solo artist, Elizabeth has self-released numerous albums including: {this is not a piano album} (2016), A Series of Strange Narratives (2015), A Sonic Memory Quilt (2015), Music for Possible Probable Ghost Listeners (2015), {BAGGAGE CLAIM} (June 2015), and Solo Piano Compositions In Recital (2011). In 2017, Elizabeth signed with LA-based Aerocade Music, her first release on the label is slated for May 2018.

Elizabeth is Founder and Executive Director of The New Music Conflagration, Inc., a 501(c)(3) nonprofit and 509(a)(2) public charity founded in the State of Florida to promote the work of contemporary composers and musicians. She is also, Founder and Director of the Florida International Toy Piano Festival. In March 2018, Elizabeth gave up work as an arts administrator, to focus on her artistic practice and presentation.